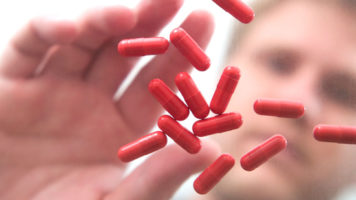 Do the same thing over and over again for 18 years and you get used to it. That’s how Manny Johnson feels about the regularly scheduled blood transfusions he requires every month to keep the crippling, potentially life-threatening symptoms of sickle cell disease at bay.

“I was never bothered by it because it was just the way it was, it was part of me,” says Johnson, now 21, about the regimen of blood transfusions that began when the lifelong resident of Boston’s Mattapan neighborhood was 3 years old.

But earlier this year, Johnson became the first sickle cell disease patient to undergo a one-time treatment with a novel gene therapy aimed at inducing his body to produce a form of healthy, oxygen-carrying hemoglobin usually made by fetuses and newborns.

The results of this gene therapy clinical trial, being reported Saturday for the first time at the American Society of Hematology annual meeting, are preliminary but encouraging. For the past six months, Johnson hasn’t required blood transfusions. He’s symptom-free. And when doctors peer into his blood, they see no evidence of the damaged, crescent-shaped red blood cells that give sickle cell disease its name.